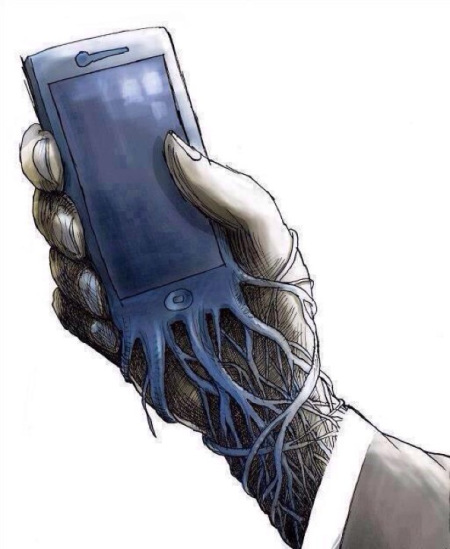 I would like diverge from the usual theme of this blog by considering a specific occupational health issue – that of what is still often described as “RSI”. Unfortunately that label is both inaccurate and invokes an emotive response, so I try to avoid its use as much as possible, but the term is difficult to avoid because of its entrenched status, popular usage and lack of a suitable alternative term.

I have taken an interest in this subject from the time of the so-called “RSI Epidemic” of the 1980’s. At that time I was the Senior Medical Officer at the Hydro-Electric Commission (now Hydro Tasmania) and that organisation had their share of these problems, although not to the same extent that Telecom (now Telstra) did at the time – as has been described in the literature by Occupational Physician, Dr Bruce Hocking.

In my various roles since that time, I regularly encounter the phenomenon of upper limb disorders in computer operators, that, on the face of it, is caused by the sufferer’s work using computers. Particular problems seem to relate to mouse usage, perhaps more so than with keyboard use, although the underlying common factor appears to be the posture adopted at a computer that restrains normal upper limb movement for sustained periods. Similar problems are encountered with musicians and sonographers. Aggravation in association with driving posture is also widely reported.

While some sufferers have associated psychological disorders, my overwhelming impression is that the majority of sufferers are “normal”, often hard-working and dedicated people who suffer a convincing syndrome of pain and associated neurological symptoms that is temporally related to their use of computers at work. Chronic pain causing long-term disability from these disorders is common.

While there is a relative dearth of objective clinical findings, the presentation is sufficiently convincing in terms of consistency and response to aggravating and relieving factors for me to accept that this probably represents an “organic” condition and is not a primary psychological disorder, fibromyalgia syndrome, hysteria or a socially-caused phenomenon as has been suggested by some commentators.

it is difficult to get accurate official figures on the incidence of these disorders in Australia in recent years. The 2016 statistics for musculoskeletal disorders from SafeWork Australia include the following table: 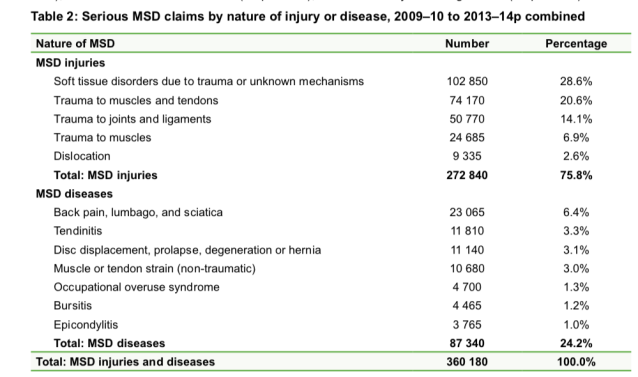 This table would suggest that in the period covered there might have been 4,000 or more cases of upper limb overuse syndrome, comprising 1.3%  of claims. If bursitis, tendonitis, epicondylitis and non-traumatic muscle or tendon strain are included the total is potentially much higher i.e. 30,000 or more claims.

What I have observed in recent times, is that Comcare, in particular, have challenged continuing compensation for many sufferers of these disorders. It is difficult to know how many claimants accept Comcare’s determination of entitlements and don’t make a legal challenge, but I am aware from reviewing decisions in the AAT and from contact with doctors and solicitors in Canberra and Hobart that the decisions made by the AAT can vary widely with both acceptance and rejection of upper limb disorders claimed as being related to use of computers. One of the important determinants of the outcome is whether there is a specific diagnosis.

AAT Senior Member DJ Morris in Neville and Comcare (Compensation) [2018] AATA 3738 (5 October 2018) found no reason to even consider evidence about work causation on the basis there was no acceptable medical diagnosis. He states:

“An essential first element in assessing a claim for workers’ compensation is that a person has a medically diagnosed ailment as defined in section 4 of the Act and whether a person has an “injury” in terms of section 5B(1)(a). It is accepted that Mr Neville may have discomfort in his right forearm, but that is not enough. Mr Neville relies on Dr Cooke’s use of the term “overuse/RSI ” as a settled diagnosis, but in his evidence, Dr Cooke himself submitted it was not strictly a diagnosis. “

“The Tribunal is satisfied that the reviewable decision was erroneous in that it concluded that the applicant no longer suffered from the effects of a compensable condition. The Tribunal is of the view that the applicant continued to suffer from the effects of the compensable condition secondary complex regional pain syndrome. For these reasons the decision under review is set aside and the matter is remitted to the respondent to give effect to the determination of the Tribunal.”

Not a lot seems to have changed since the time of the case Maree Verna Tyrrell and Westpac Banking Corporation [No 2924 of 1990] (14 December 1992) when Judge Barlow concluded:

“However, the plaintiff has failed to persuade me the nature and conditions of her employment constituted a hazard and risk to her health, that is to say a risk of injury, and in particular a risk of sustaining a condition or injury referred to as RSI” .

“I am inclined to the view their lack of objectivity has led them, subconsciously at least, to develop a hypothesis to fit their theory that pain syndromes, of the type which the plaintiff claims to suffer, have a neurogenic cause. In reaching this conclusion I have not overlooked Professor Mastaglia’s comments, that the contents of Professor Helme’s paper [1]could be the beginning of objective evidence of an organic basis for this type of pain syndrome” .

It would seem that the Tasmanian Workers Compensation Tribunal is having difficulty with decisions on this subject. No decision has been made about a case of upper limb pain related to computer employment where the hearing was conducted in February this year (or maybe the Tribunal is just under resourced).

What was previously called “RSI” is currently often described as “non-specific” arm pain. Lack of agreed diagnostic criteria means it is difficult, if not impossible, to accurately explore relationships to workplace factors. On that basis proof to a high degree of scientific certainty about occupational causation for “RSI” has remained elusive. If it were established that there is a specific diagnosable disorder, causative factors can be scientifically examined.

When I listen to the evidence delivered by practitioners who deny the possibility that computer work can cause such disorders, there seems to be a heavy reliance on the evidence and opinions from the time of the “RSI Epidemic” rather than referring to up-to-date evidence about the mechanisms of chronic pain or occupational epidemiological studies.

Recently I have spent more than 50 hours preparing a literature review related to the above subject. In particular, I looked at literature relevant to the question whether brachial plexus neuropathy (BPN) might constitute a specific diagnosable condition and provide an explanation for many cases of upper limb pain related to computer employment.

Dr Jorgen Jepsen in Denmark has done some work that seems to suggest that BPN might be a specific disorder that can be diagnosed reliably by a careful detailed clinical neurological examination, building on the earlier hypothesis of the West Australian Rheumatologist, Dr John Quintner of a neurological basis of “RSI”.

The work of Dr Jepsen needs to be replicated by other researchers, but his work does provide evidence of a disorder plausibly related to the postural demands of computer work, worthy of further research.

I suspect there is reluctance on the part of many organisations to further explore this subject because of the very significant implications for employers and compensation providers should incontrovertible evidence emerge of a causative relationship between the common upper limb pain  syndromes and computer employment.

In a 2014 article in The Conversation, entitled Repetitive strain injury: is it real or imagined? the author suggested the science was settled while recognising continuing negative connotations from the disorder, as follows:

“While the term RSI, which implies an injury which has been caused by physical factors, has long-since been replaced by the term occupational overuse syndrome (OOS), its use, and the negative connotations associated with it, persist.

Fortunately, diagnostic criteria have now improved. Workplace injuries and conditions which would previously have been classified as RSI are now more accurately diagnosed. This, along with greater acceptance of the role of psychosocial factors has led to improvements in the management – and the outcomes – of these injuries.

All we need now is to improve our recognition of the importance of these factors in the prevention of injuries – but that’s another story.”

I would not accept the conclusions about accurate diagnosis and improved outcomes, at least from my perspective of a practicing physician who regularly sees these cases, the wide variety of diagnostic labels that are applied, the confusion about entitlement to compensation and sometimes poor outcomes.

While employers almost universally accept the value of preventative measures to prevent “discomfort” amongst computer operators, elucidation from a scientific perspective of specific medical conditions caused by use of computers and the circumstances in which that can occur can only be of value in prevention of disability,  contribute to a productive workforce and ultimately save costs to the community.

Occupational Physicians have an important role to play in this area and should take the lead in researching and putting forward the evidence, without fear or favour, to allow informed decisions to be made, both at a system and individual case level. These disorders are clearly the province of occupational medicine, rather than other medical specialities.

I THINK THE TIME IS RIGHT TO REVISIT RSI!

6 Responses to Time to Revisit “RSI”!